NDA template: how to protect your business’ information 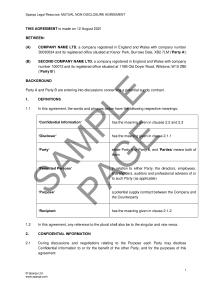 An NDA template (also known as a non-disclosure agreement or confidentiality undertaking) helps you protect your business’ confidential or sensitive information. Consider using an NDA before entering into discussions with an external party (for example, when discussing a new project or idea or discussing your business with potential investors). If you have disclosed information to someone and do not have an NDA in place, it will be much more difficult to make a legal claim against them for misusing your information. This guide provides templates for both one-way NDAs and mutual NDAs.

What is an NDA template and why do I need one?

What is an NDA template?

An NDA template is a legal agreement to prevent the misuse of confidential or sensitive information. If someone to whom you plan to disclose information on your business signs an NDA (also referred to as a non-disclosure agreement or confidentiality undertaking) that person will typically agree:

You can find NDA templates at NDA (one way) and NDA (mutual). See below for further guidance on which type of NDA may be more appropriate for your business.

How do I use the NDA template (one way)?

How do I use the NDA template (mutual)?

When should I consider using NDA templates?

You should consider using an NDA in any situation where you are planning to disclose information on your business to a third party. An NDA should be signed before you disclose any information. Most typically, this will be during the early stages of discussions or negotiations on a particular idea, project or transaction. You should also consider using an NDA when entering into discussions with prospective investors and lenders (see How to prepare in advance of raising money) and prospective buyers (see Protecting a business when looking to sell).

NDAs are also commonly used in the context of employment, both when discussing your business with a potential employee or consultant, and when a member of staff leaves your business. It is in this latter context in particular that the use of NDAs can prove more controversial.

What are the benefits to me of having a signed NDA before disclosing information at business meetings or negotiations?

The key reasons why you should ask for an NDA to be signed before disclosing business information include:

NDAs are widely used in business but legal proceedings to enforce them are relatively unusual. For this reason, even if you have an NDA in place, you should still be cautious about disclosing any particularly sensitive or confidential information.

What information should I be looking to protect with a business NDA template?

Before presenting an NDA to be signed, you should think about the information you are looking to protect, so you can justify why an NDA should be signed. For example, a person with whom you are negotiating is likely to have more understanding if you are looking to protect information on a novel invention rather than general financial information on your business. If the information includes intellectual property, you should take what steps you can to protect it before the meeting or negotiation – registration if you have a trade mark, invention or design, or careful recording in the case of any creative work.

The purpose of an NDA is to protect business information you disclose in the course of a business meeting or negotiation. In particular, you should be looking to protect the following information:

If there is any information you are particularly concerned to protect, such as details of an invention or a feature of your business model, you should exercise caution about disclosing such information in the first place and additionally consider specifically referring to it in any NDA you prepare. A well drafted NDA will contain exclusions from the information protected to avoid later arguments that the NDA is too wide and therefore not enforceable.

What information is typically not protected by a business NDA template?

The reason for doing so is to avoid later arguments that the NDA is too wide and therefore not enforceable.

How should I ask someone to sign an NDA?

Whether someone to whom you plan to disclose information at a meeting or during negotiations will agree to sign an NDA depends on the particular circumstances of your meeting or negotiations and whom you are dealing with. You should think about this before presenting an NDA to them.

It may not always be appropriate for an NDA to be signed, for example if you are interviewing someone for a relatively junior role and you do not have to reveal any confidential or sensitive information. This is in comparison with an interview for a senior position, for example chief technology officer, or where you are negotiating a business collaboration, where you may need to disclose sensitive information.

Some businesses will refuse to sign an NDA as a matter of principle. For example, if you are looking to raise money for your business by issuing shares and plan to pitch to crowdfunders, some crowdfunding platforms say on their websites that will they not sign NDAs (see How to prepare in advance of raising money). Other businesses to whom you want to pitch may not want to engage with you if you ask them to sign an NDA, taking the view that they would rather deal with someone who does not require this.

Also, you should decide whether you will ask the recipient to sign a one-way or mutual NDA. It may be easier to persuade someone to sign an mutual NDA, as it shows you are thinking of their interests as well as your own. See below for the differences between one-way and mutual NDAs and further guidance on when each type is appropriate.

What is a one-way NDA template?

An NDA can be either one-way or mutual. In a one-way NDA, most of the undertakings will be given to you by the person to whom you plan to disclose information. See NDA (one way) for a one-way NDA you can use for your business.

What is a mutual NDA template?

It may also be appropriate to present mutual NDAs for some interviews where you will be expecting the candidate to reveal confidential information to check their suitability – for example, if you are interviewing a consultant to work in your business for a while.

Should I be worried about the bad reputation of NDA templates in the media?

Increasingly, the use of NDAs by companies has attracted bad press in the British media, with suggestions that the government may legislate to ‘ban’ NDAs. It is important to understand that this discussion is focused on the use of NDAs by employers to gag former employees, or to cover-up misconduct. There been no call in the UK Parliament for a blanket ban on any use of NDAs. Indeed, when used properly, NDAs will always be an important legal tool for businesses to protect confidential or sensitive information. Unless you are using an NDA to cover-up potential misconduct or to gag an individual from discussing or disclosing wrongdoing, there is no reputational risk for your business in using NDAs for genuine commercial purposes. Indeed, they remain one of the most common ways for businesses to protect their information during negotiations and meetings.

NDA templates: Disclosing information without one

What if I disclose information to someone who has not signed an NDA?

If you have disclosed information to someone and do not have an NDA in place, it will be much more difficult to pursue that person for misusing the information already disclosed. If you wish to prevent a recipient who has not signed an NDA from misusing your information unlawfully, or if you wish to claim damages from them for unlawful misuse, you will need to prove that the information was confidential and received under an obligation of secrecy.
In comparison, if you do have an NDA in place and the person who receives information from you misuses it in breach of the NDA, you will have a legal claim against the recipient.

Can I ask someone to sign an NDA after I have disclosed information to them?

Yes you can but you should avoid doing so as disclosing information before an NDA is signed could cause you two potential problems. If the person to whom you have disclosed information will not sign, it will be more difficult for you to pursue that person for misusing the information although you can refuse to disclose any more information.
Even if the recipient will sign, you may have difficulty enforcing the NDA, especially with regard to information you have already disclosed. In these circumstances you should pay a small sum to the recipient (such as £5) and refer to this in the NDA. The template NDAs you will find in NDA (one way) and NDA (mutual) assume that no information will be disclosed before they are signed and therefore do not refer to any payment.

What should I do if the person I am dealing with refuses to sign a NDA?

You should be aware that some institutions do not sign NDAs as a matter of policy – for example, crowdfunding platforms (see Choosing and approaching new share investors).

What to include in an NDA template

What provisions should I include in an NDA to protect my business?

A well drafted NDA will typically include the following provisions:

The template NDAs you will find in NDA (one way) and NDA (mutual) contain these provisions. In the one-way NDA, you also agree to keep details of the discussions confidential in order to present a more balanced NDA for signature.

Less common but sometimes included in an NDA are undertakings from the recipient not to entice staff or customers away from the business being protected. These are not included in NDA (one way) and NDA (mutual).

Marion joined Sparqa Legal as a Senior Legal Editor in 2018. She previously worked as a corporate/commercial lawyer for five years at one of New Zealand’s leading law firms, Kensington Swan (now Dentons Kensington Swan), and as an in-house legal consultant for a UK tech company. Marion regularly writes for Sparqa’s blog, contributing across its commercial, IP and health and safety law content.