What is a letter of intent? 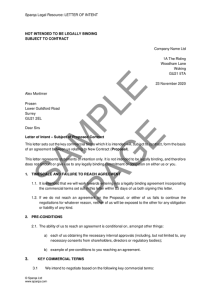 A letter of intent is a letter given by one party to a commercial negotiation to another to help facilitate business discussions. The letter will usually set out the agreed key commercial points which will form the basis for your negotiations, and a timescale for entering into a formal commercial agreement. The letter is generally not legally binding unless you specify that it will be.

A letter of intent is sometimes also referred to as heads of terms, heads of agreement, a term sheet or a memorandum of understanding.

Why a letter of intent is important

The purpose of a letter of intent is to give both parties confidence that a deal is possible and that continuing negotiations is worth the time and expense which you will both spend. It’s often regarded as an important ‘commercial agreement in principle’ as it sets out the key commercial terms of the negotiations, which the parties will often be reluctant to move away from until they have signed a legally binding agreement.

Without a letter of intent, you may find that you and the other side to the negotiations spend a lot of time and money but cannot conclude your deal due to disagreement on a key point. Your letter is designed to avoid this by flushing out potential disagreements on key points (if any) at an early stage. Equally, if you are unable to agree a letter of intent with the other party, you should probably stop any further discussions as you are unlikely to be able to negotiate a final agreement.

When you should use a letter of intent

Although letters of intent are not normally legally binding (see below), you should consider using one if you would like to formalise your discussions with another party, with a view to entering into a binding commercial agreement. For example, you might use a letter of intent if you plan on collaborating on a project with another business and want to make sure you both agree on key goals and objectives before negotiating a more detailed agreement.

Your letter of intent should set out the understanding of the parties as to the key terms that they will be negotiating and how they intend those negotiations to proceed. This includes terms such as the timescale within which you intend to reach a formal agreement, any pre-conditions to your agreement and an overview of the key commercial terms. For detailed guidance about what you should include in your letter of intent, read this blog.

Our template letter can be customised to your business and allows you to set out clearly the key terms that you have agreed in your initial commercial negotiations. This will help to give both parties the confidence to continue to finalise a deal within an agreed timeframe.

Get Letter of Intent

The legal nature of a letter of intent

A letter of intent is not generally legally binding unless you specify within the letter that it will be. For further guidance about how to do so, read this blog.

The purpose of the letter is simply to give both parties confidence that a deal is possible and that continuing with their negotiations is worth the time and expense that each party will spend. Letters of intent are, however, considered to be ‘morally’ binding as they set out the parties’ intentions to reach a legally binding agreement and provide a focus for their discussions. Reneging on, or trying to renegotiate, the terms of the letter of intent can adversely affect your relationship with the other party. For further guidance about the legal nature of a letter of intent, read this blog.

Planning for the future: is remote working here to stay?
Talk Money Week: Spotlight on workplace pensions
How to write terms and conditions