What is included in a non-disclosure agreement? 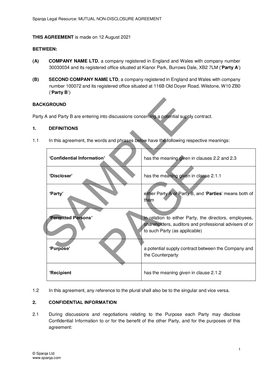 You can find template NDAs at NDA (mutual) and NDA (one way). You can also purchase these templates as part of the Protecting IP and confidential information toolkit.

The purpose of an NDA

Your starting point before going into a meeting or negotiation should generally be to reveal as little information as is necessary to convey what your business delivers.

However, it is inevitable that in the course of a business meeting or commercial negotiations, you will be disclosing some valuable information about your business. You also need to keep in mind the possibility that discussions, even if they reach an advanced stage, may not conclude in a deal. Therefore, you will want to prevent the information being stolen or misused.

Protections against misuse of your information should be included in a non-disclosure agreement, normally giving you a legal claim against the recipient of the information who has breached the NDA. In particular, an NDA allows you to protect:

What is included in a non-disclosure agreement

Provisions that are included in a non-disclosure agreement will often depend on the information you are trying to protect and whether it is a one-way or a mutual NDA. You can find template NDAs at NDA (mutual) and NDA (one way). You can also purchase these templates as part of the Protecting IP and confidential information toolkit.

A well drafted NDA will typically include the following provisions:

Information typically excluded from protection under an NDA is:

The reason for doing so is to avoid later arguments that the NDA is too wide and therefore not enforceable.

Disclosing information to someone who has not signed an NDA

If you have disclosed information to someone and do not have an NDA in place, it will be much more difficult to pursue that person for misusing the information already disclosed. You’ll need to prove that the information was confidential and received under an obligation of secrecy.

You should be aware that some institutions do not sign NDAs as a matter of policy – for example, crowdfunding platforms.

For further guidance on how to use NDAs, see our Q&A.

Marion joined Sparqa Legal as a Senior Legal Editor in 2018. She previously worked as a corporate/commercial lawyer for five years at one of New Zealand’s leading law firms, Kensington Swan (now Dentons Kensington Swan), and as an in-house legal consultant for a UK tech company. Marion regularly writes for Sparqa’s blog, contributing across its commercial, IP and health and safety law content.

Leaving or downsizing your tenancy during COVID-19 - a guide for businesses
Out of sight but not out of mind: Health and safety implications for staff working at home
Safer Internet Day: Protecting children’s personal data online